Billie Jordan survived a major earthquake in New Zealand, but she was so traumatized after seeing people die in front of her she fled to tiny Waiheke island, where she bonded instantly with the senior citizens: death was on their minds, just as it was on hers. She figured if everyone was going to die, why not go out dancing?  In today’s episode Billie talks about forming the Hip Op-eration Dance Academy—tailored for people ages 72-96—defying ageist stereotypes, the response to her project and how she and her troupe have been reborn through dance.  She also shares her grueling yet at times hilarious experience of caring for, training and managing her senior dancers on the road to performing at the World Hip Hop Championship in Las Vegas—a journey captured in the documentary film, “Hip Hop-eration.”   Tune in for this extraordinary tale of going from darkness into light and living life to the fullest.  Note: this episode originally broadcast on September 15, 2016.  Billie has since moved back to the mainland and now lives in Auckland. 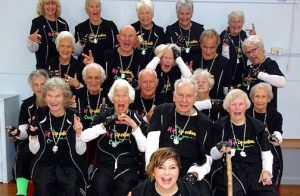 Watch the crew in action (must be viewed in YouTube):