Episode 97: Anything For That Smile

Loretta Veney’s greatest fear is that her mother will outlive her money.  Her great grandmother lived to age 107 and her grandmother to age 98.  Neither had dementia.  But Loretta’s mother was diagnosed with Alzheimer’s disease at age 77.  In today’s show, Loretta talks about journeying with her mother through Alzheimer’s and her book “Being My Mom’s Mom.”  She describes the hilarious, poignant tale of her mother’s escape from her group home and the “earthly angels” who helped return her to safety, how she adapted to her mother’s reading aloud phase and the grocery store drama that led to a customer pleading with Loretta for help managing her anger issues with her mother.  Loretta also talks about her husband’s death, coping with loss and why Lego bricks play a key role in her caregiver training.  Tune in for an inspiring conversation with this fifth generation Washingtonian.

Washington Post article: How Alzheimer’s Turned A Daughter Into Her Mom’s Mom 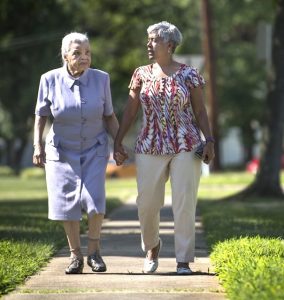 Music: “Even When We Fall” by Philipp Weigl | CC BY | Free Music Archive