WHO on Aging Populations: Think Investment, Not Cost 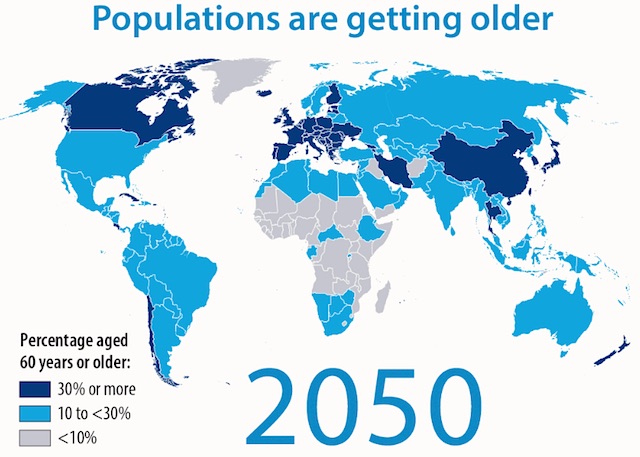 Two days ago the World Health Organization (WHO) launched its 254-page World Report on Ageing and Health.  Timed to coincide with the United Nations’ annual International Day of Older Persons on October 1, the report’s release was accompanied by a briefing by WHO Director-General Margaret Chan, MD, who urged global leaders to think of the challenges of an aging population in terms of an opportunity.

The report, Dr. Chan said, “summarizes the opportunities that accompany population aging, and also the many barriers and knowledge gaps that block these opportunities.  It is in our collective interest to work together to unblock these barriers.”

Kudos to Dr. Chan for framing the issue as a chance for societies to benefit through comprehensive collective action.  And to the WHO for continuing its work on  changing attitudes about aging.  In the edgy 2012 video below, the organization promotes the idea of adding “life to years” through healthy aging:

Back to the WHO report: to read (or skim) it in full click here:  WHO Report on Ageing and Health

For a sampling of how the media covered the release of the WHO report, check out these graphics-laden articles:

Lisa Schlein – Voice of America
WHO: Health Systems for Aging Need Urgent Revamp
“The World Health Organization on Wednesday called on nations to redesign health care systems to adapt to the special needs of an aging population, saying there has to be a radical change in attitudes toward the elderly, who often suffer from neglect, abuse and discrimination.”

Miriam E. Tucker  – Medscape Medical News
WHO Calls for Major Shift in View Toward Older People
“John Beard, MD, director of the WHO’s Department of Ageing and Life Course and a lead author of the report, told Medscape Medical News that one of the report’s implications for healthcare professionals is ‘to step beyond the idea that healthy aging is the absence of disease and to realize that what’s more important for an older person is their functional ability that comprises both themselves and the environment they live in.'”

Zulfikar Abbany; Gudrun Heise – Deutsche Welle
Aging health: WHO call to action as world population over 60 set to double by 2050
“But I’m not old, so why should I care?  Well, all this is happening at a faster rate than ever before. And the WHO says “all countries face major challenges to ensure that their health and social systems are ready” for this major demographic shift. It will cost a lot of money to improve health and social infrastructures, especially in more developed countries where traditional families structures have changed dramatically.”

United Nations News Centre
People over 60 will double by 2050 but little evidence they will be healthier – UN report
“The report highlights three key areas for action, beginning with making cities and communities friendlier to older people. Also critical is realigning health systems to the needs of older people and governments developing long-term care systems that can reduce inappropriate use of acute health services and ensure people live their last years with dignity.”

Just skimming the above articles will make you more aware of how we’re all connected in this world, and how country leaders can choose whether to keep their aging populations healthy.